Ted is helping to build a vibrant, healthy and resilient community!

Ted Drewlo has supported the development of HOPE House from its inception. “I became involved with volunteering after I retired. I was looking for something to do related to HOPE House. I belong to Lakeside Church and I was involved with the purchase of the old United Church and the setup of the HOPE House charity.” says Ted.

After contributing in a variety of ways towards its launch in 2012, Ted continues to volunteer at HOPE House each week the café. “There are lots of people that come in to HOPE House and everyone has a story. Listening is important” says Ted.

“Often, those who are experiencing poverty are silenced, so having people like Ted, who are available and happy to lend a listening ear and engage in conversation, enables people to reflect on their experiences and to expand their number one resource – relationships” shares Kim Lyons, Development and Communications Lead.  “We believe the opposite of poverty is community, so Ted’s willingness to work toward trusting relationships with community members is key to building a vibrant, healthy and resilient community here at HOPE House.”

In addition to volunteering with the Café, Ted has played a major role supporting HOPE House as Director of the Coldest Night of the Year (CNOY) event for the past three years. As a previous Civil Engineer managing major projects, Ted’s experience is a perfect for the role.

Ted pours a tremendous amount of energy in coordinating people to make CNOY a success from volunteer coordination, route mapping and safety and hospitality to the sponsorship recruitment team; the team captain recruitment team; social media communications; and photography. Ted also sets and monitors campaign goals and strategies and organizes the pre-walk CNOY kickoff. “There is no doubt that Ted goes above and beyond the normal preconceptions of volunteerism to support the critical work of HOPE House. We depend on the funds raised by major events like Coldest Night of the Year to sustain our immediate and ongoing support programs. His time and efforts are greatly appreciated!” says Kim

“This is a wonderful charity that helps hundreds of people every month”, says Ted “donations are needed from the community to support the work done here. The Coldest Night of the Year event is coming up February 24th. Please register to walk or support someone who is walking and raise money to help feed hungry, homeless and hurting people in Guelph.”

To learn more about Lakeside Hope House and the Coldest Night Of The Year, visit www.cnoy.org/location/guelph 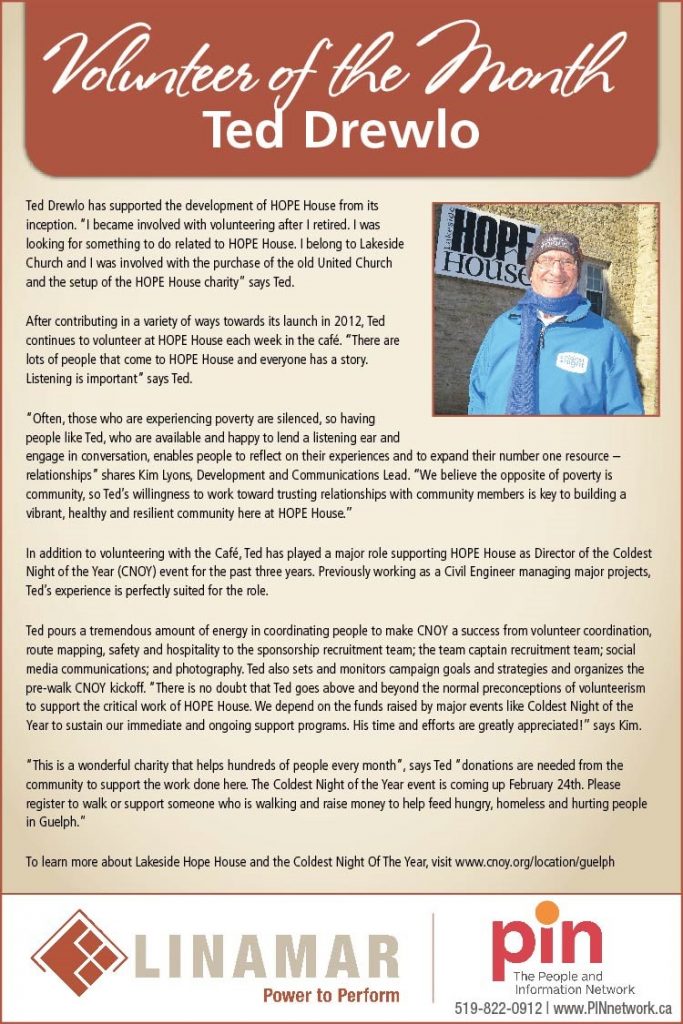