Joan is a star!

Over the years, Joan Burnett has been an avid volunteer and after her recent retirement, she was ready to begin giving back once again. In October 2019 after attending a health show at Palmerston Arena, Joan approached Kelsey Richardson, Meals on Wheels Coordinator at VON, a non-profit, charitable home and community care organization. Joan requested an application and soon began a very impactful journey, for both herself and the community.

Her previous experience in health care has been beneficial over the past few months while volunteering at VON. Joan worked as a nurse for 20 years and had hoped to continue supporting the health care field after her retirement.

Since Joan began volunteering with VON, she has helped numerous people, both staff and clients, through her work in a variety of roles. Joan began her volunteer experience with supporting the coordination of the frozen food program, but soon moved on to administration support and calling clients who have expressed their gratitude and explain that Joan is so very nice to talk to.

“Although Joan hasn’t been with VON long, her impact has been astonishing” says Kelsey, “since day one she made it very clear that her help has no limits, she is always willing to support any program with any tasks. With Joan’s help, programs have been able to complete projects and have extra time for improvements to client’s services. Joan’s caring and compassionate personality brings so much to the lives of the clients she interacts with. Joan is a star and we’re so thankful she’s chosen VON to volunteer with.”

It is clear that Joan’s actions have had an enormously positive affect in the community. Her experience is a great example of how the smallest actions can have the largest impact on someone else. Not only that, but Joan has also gained just as much in return by giving back. She is truly extraordinary, and her assistance has been very impactful in the community.

Despite all that she has given, this experience has been very rewarding for Joan. She has expressed that she enjoys going into volunteer as it keeps her active. Joan explains that it is a great opportunity to learn and be productive while giving back and helping the community.

“I have thoroughly enjoyed volunteering at the Mt. Forest and Guelph offices,” explains Joan. “The staff have been remarkably kind and helpful to me. I couldn’t have done it without them. I look forward to continuing to volunteer; Kelsey and Kayla give really good hugs, the entire staff do such as wonderful job, they deserve the award.”

Learn more about the work of VON, visit von.ca. 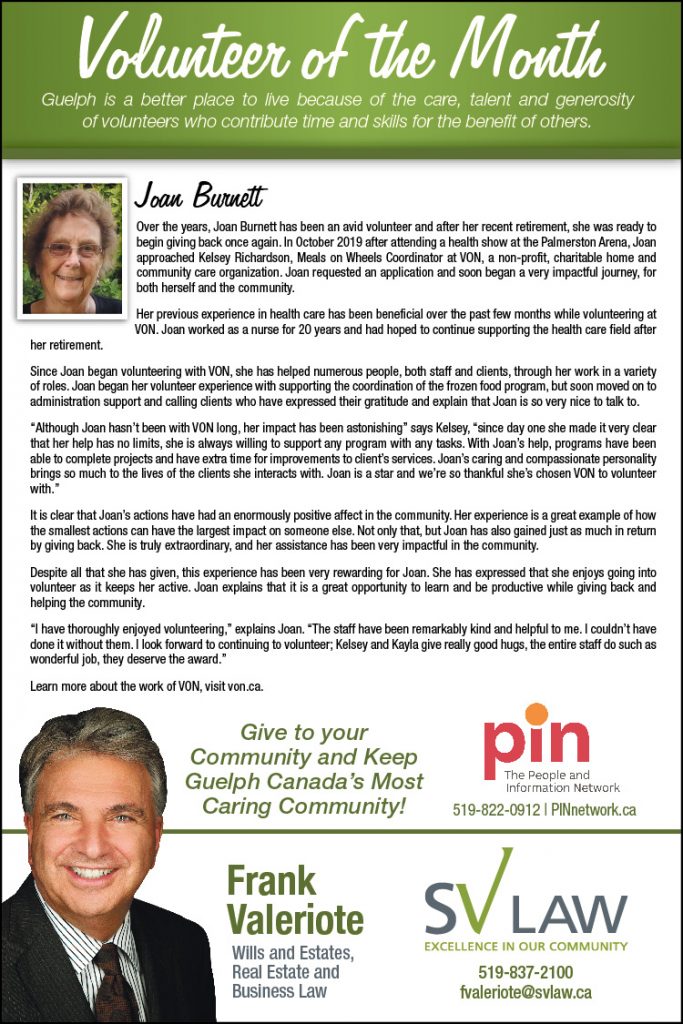